The first formative meeting of the club was held with Jack Carruthers, Jack Merrell, Jack Crompton, Harold McColl and Russ Winfield in attendance. Sensing they had a good hand of cards (three Jacks) they decided to go “all in” on the formation of the club and with that the Food Executive Club of Vancouver was born. 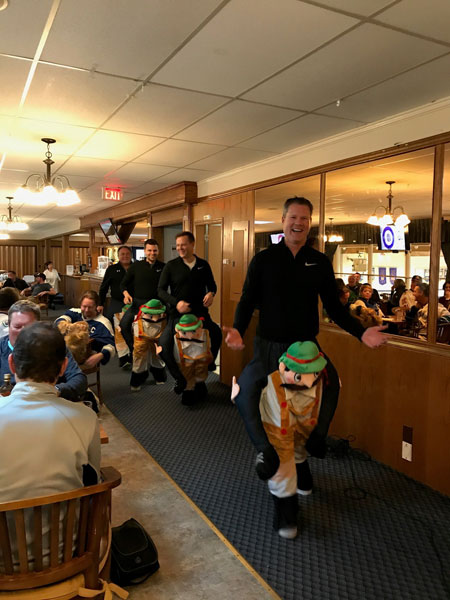 Monthly meetings of the Club were subsequently held at various locations including the Devonshire Hotel, the Dog House on Broadway & Fir, the Marine Drive Golf Course, and now at our current location the Executive Plaza Coquitlam.

The original objective of the club was to foster better relations between Club members and the Grocery Trade by creating an atmosphere of co-operation through collective discussion and dissemination of information. Later the Club's activities were broadened to include social events.

In 1957, an Annual Golf Tournament, hosted by the Club for members and trade guests, was initiated. The Dough Fraser Memorial Trophy was created in memory of Dough Fraser, who at the time of his passing had been head buyer of Kelly Douglas. This tournament still goes on today. Another popular social event is the Club's annual Dinner and Dance, which has been held in November of each year since 1958. In 1970 the Club started an annual Curling Bonspiel, held every March and is always a great success.

The Food Executives also works to recognize outstanding work in the industry and has had a series of awards and bursary’s over the years, including the creation in 1973 of the President's Trophy; first awarded to Bill Craig to commemorate those who have made outstanding contributions to the industry. FECOV annually awards bursaries to top performing students who are the deserving sons and daughters of active members.

As the food industry has changed, so has the club. With the mirroring of the categories found in grocery stores everywhere, FECOV is welcoming members from Food, Food Service, Consumer Products, Drug, Beverage Alcohol and other service providers to the industry. Together we make a vibrant community of professionals seeking to bring the best to our retail partners and to develop as professionals in our industry.

The FECOV is operated as a member funded, non-profit society and is led by a volunteer board of directors elected by the membership.